And we take pride in our relationships

We believe in people. Were grateful for the long-term relationships weve built, with coworkers and clients alike, over a span of fifty years. And we take great pride in the important work that our associates do for our clients, every day.

We are a team of 100+ highly specialized, global logistics professionals, dedicated to the success of our clients. With five decades of experience and our international network and overseas partners, our clients see us as much more than just another service provider. They see us as a trusted extension of their company and a critical link in their supply chain.

Meet some of our humble heroes.

Don Brown formed Rogers & Brown in 1968, setting out to fill a void in customer service for the shipping industry. His vision and principles have helped him grow the company from three employees to over 100 with offices and partners around the globe. All built on his promise of delivering exceptional customer service.

A licensed Customhouse Broker with more than 50 years’ experience in the transportation industry, Don continues to help guide the company toward the future. He is a graduate of Palmer Business College with a degree in Business. Don is married with four children and nine grandchildren. Outside of the office he enjoys hunting, working on his farm, and traveling in his RV.

As President, Raymond oversees all aspects of the company – Rogers & Brown Custom Brokers, Inc., Brown Distribution Centers, and Rogers & Brown North American Logistics. In his 34 years with the company, Mr. Kelley has gained an unparalleled understanding of all aspects of the logistics business providing a sense of confidence to our customer base as a result of his knowledge.

Raymond is a licensed Customhouse Broker and has taught preparation courses for the Customs Brokers Exam and certification classes for Hazardous Material documentation handling. Originally from Johnston, SC, he is a graduate of the College of Charleston. He has two children and resides in Goose Creek, SC with his wife.

Mark Hughes began his career with Rogers & Brown in February 2004. During his many years with the company, he has worn many hats: Account Representative, Team Leader, Account Manager, Director of Warehousing, Operational Director-Domestic Supply Chain and currently holds the position of Vice President of Operations and IT. His first position was in the Export department which paved an International attribute that has contributed strongly in warehousing and domestic transportation services.

Mark arrived in Charleston shortly after graduating with a B.S. in Business Administration from Old Dominion University in Norfolk, VA. He is married, has three children and resides in Summerville, SC.

Beth began her career with Rogers & Brown in March of 1981 in the Export department. She began attending college with a focus in accounting and later transferred to the accounting department where she worked for 12 years. Because of her love of the industry and accounting background she took on the role of Duty Drawback Manager in 1996. During her years with the company she has successfully managed the Accounting, Duty Drawback, and Entry departments before being promoted to the Director of Duty Drawback and Compliance.

Beth attended college at Trident Technical College and the College of Charleston, where she completed an Intermodal program. She is married, has two sons, and resides in Charleston, SC.

Emilie joined the company in June 2020. She has spent her career in a variety of manufacturing industries and brings a vast knowledge of process improvement, cost improvements and bottom line enhancements. She is a University of Michigan graduate and holds a MBA from Charleston Southern. Emilie is a Charleston area native, has two grown children and resides with her husband in Summerville.

Gabe’s role as Vice President of International Operations focuses on the continual growth of Rogers & Brown. He began working for Rogers & Brown in 2006 after beginning his maritime career with one of the world’s largest steamship lines. Gabe’s tenure with Rogers & Brown has included successful leadership/operational management roles in both our import and export transportation departments as well as time in sales and customer support. From the experiences gained, Gabe is using his talents to drive new Sales & Global Development growth of Rogers & Brown’s international business into the next generation.

Originally from Waynesboro, VA, he graduated from Clemson University and resides in Charleston, SC with his wife and two children.

Courtney joined Rogers and Brown in July of 2008. Initially she was working in Inbound Transportation. She was then promoted Inbound Transportation Manager and subsequently appointed NVOCC Manager. Currently Courtney oversees Import and Export Operations along with our Ocean Rating Department at the corporate office.

Originally from Buffalo, NY, Courtney graduated from John Carroll University with a concentration in International Business. Courtney is a member of our local Lions Club and resides in Mount Pleasant, SC with her husband and 2 children.

Debbie came to Rogers & Brown in 2000 after 10 years experience in the food brokerage business. Having been hired as an Import Customer Service Representative Debbie was quickly promoted to team leader. After serving as an Import Customer Team Leader for 5 years, Debbie was promoted to Corporate Import Manager in September of 2006. Debbie resides in Hanahan, SC with her husband Jerry and has 5 children and 6 grandchildren.

Wallace Hester, Director of Sales
Wallace brings over 20 years of domestic and international logistics experience to the Rogers & Brown team. Common themes of customer-focus, loyalty and hard work run through his professional history and prior management roles held before rejoining Rogers & Brown. Wallace is a licensed Customs broker and holds an International MBA. He and his family reside in Pinopolis, SC.

Cathy Jones, Director of Operations – Greer, SC
Cathy has been a vital part of the Rogers & Brown team since 1979. She started out as a file clerk, ventured to the Export Department for a year, Entry department for two years, Import / Air Department for another two years before being promoted to Division Manager. Cathy is a licensed Customhouse Broker and has been managing the Greer office now for 33 years. Clients have come to rely heavily on her in-depth industry knowledge, as well as her ability to quickly find and solve problems. Cathy is married with three children and lives in the Greenville, SC area.

Tanya began working in our Import Department in 1989. After five years she was moved to our Export Division and in 2005, promoted to air freight manager. She is a licensed Customhouse Broker and certified in IATA Dangerous Goods. Tanya is married with two children and resides in Simpsonville, SC.

Lori Mullins, Director of Operations – Regional
Lori has worked in the freight forwarding industry for nearly 30 years, is a Certified Customs Specialist and a Licensed Customs Broker. During her tenure in imports, her passion for trade regulations and import compliance have continued to grow along with her involvement with Houston trade. She currently serves as President of the Houston Customs Brokers & Freight Forwarders Association, is Co-Chair of the HCBFFA Customs Committee, and serves in several other capacities as a liaison for trade in the Houston port.

Lori began working with Rogers & Brown in 2001 as the Houston Division Manager and in her current role as Director of Operations, Regional, she supports the Houston, Atlanta and Norfolk Operations teams. With a vast experience in FTZ, perishable imports, large scale EPC projects, lumber, valves, steel & OCTG as well as numerous other products she provides training and operational leadership/support to her teams.

Mary Ann Jones was hired in 1998 as an import clerk and after two years was promoted to division manager. Prior to beginning her career at Rogers & Brown, Mary Ann worked as the liaison between manufacturers and military customers for S & K Sales Co, a military broker. Mary Ann is a licensed Customhouse Broker, is married, and resides in Norfolk, VA.

Roger Hartley began his career at Rogers & Brown in January 1987. During his 33 years with the company, he has taken on many responsibilities: Import Account Representative, Team Leader, Warehouse Manager, and currently holds position as Director of Warehousing at Brown Distribution Centers. His first position was in the Import department which paved an international attribute that has contributed strongly in warehousing services. Roger was born and raised in Mount Pleasant, SC and served time in the US Air Force before joining the Rogers & Brown Team. 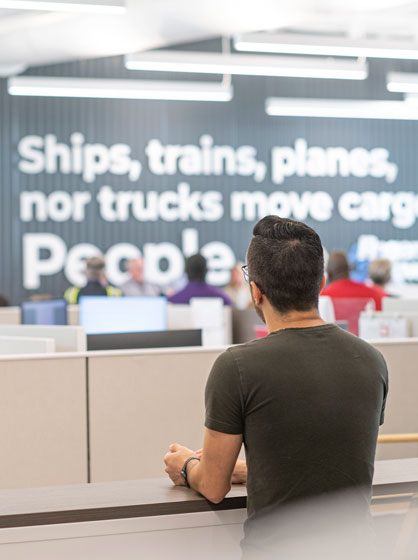